Truthfully, some of these are downright gut wrenching. You’ve been warned. Compiled by Bored Panda, this series of illustrations was designed to get us to think differently about the way humans treat animals by having us trade places with them, creating a horrific parallel universe where humans are caged, tortured, and slaughtered.

It’s a terrifying premise, but sadly, also represents the reality for hundreds of millions of animals each day.

These images have the potential to open up so many discussion topics which perhaps people are already thinking about but have never dared explore out loud. These are the uncomfortable truths that hide just beneath the surface of world. We use animals for our entertainment, we eat them, we wear them, we experiment on them, and we use them to curb our own loneliness.

People can argue for and against animals rights ’till the cows come home, but that doesn’t change the fact that we as a species see animals as ‘less than’ or as inferior to us. There is plenty more I could say on this issue, but for now, let’s just have a look at these images and take some time to reflect on how they make us feel. If you are uncomfortable, it may because they hit closer to home than you’d like.

People walk past burnt out houses following an attack by Boko haram in Dalori village 5 kilometers (3 miles) from Maiduguri, Nigeria , Sunday Jan. 31, 2016. A survivor hidden in a tree says he watched Boko Haram extremists firebomb huts and listened to the screams of children among people burned to death in the latest attack by Nigeria’ s homegrown Islamic extremists. (Jossy Ola/Associated Press)
By Haruna Umar | AP January 31 at 7:29 AM

‘Systematically’ shot and left for dead: Arkansas massacre of more than 60 dogs

A gruesome discovery has been made in rural Arkansas: Some 60 dogs were brought to a tract of land, poisoned with sleeping pills and shot. Nearly all of the canines died. Six survivors had to be euthanized because their wounds were too severe to overcome.

Two men from a lumber mill were looking at timber tracts in a remote forest area off Arkansas 254 in the Chimes-Trace Ridge Area south of Marshall. Instead they saw a disturbing sight: Scores of dead dogs scattered throughout the woods, KYTV reported.

The men notified the Arkansas Game and Fish Commission on Thursday, who then brought in the Searcy County Sheriff’s Office, Sheriff Joey Pruitt told the Harrison Daily Times.

A total of 56 dead dogs were found; one more was shot and wounded had to be put down by a game warden. There was no hope of saving the dog that had to be euthanized because of its injuries, John Magruder, the shelter manager for the Searcy County Humane Society, told KYTV.

“I don’t really have any words for what it makes me feel like. I’ve worked with dogs all my life and I love them a whole bunch and I just don’t deal well with this, but I’m doing my best so I can save the ones I can,” he said.

By Monday, five more dogs had to be euthanized because of severe injuries, Jean Passmore, the Humane Society treasurer, told the NBC affiliate. The canines were fed hot dogs laced with sleeping pills before they were gunned down, she added

Magruder managed to rescue four dogs from the forest, bringing them back to the Humane Society.

“We caught these two little female dogs. We brought them in this morning. This dog in here has been shot,” he said over the weekend, referring to a male with a bullet hole in his shoulder that is already beginning to heal.

Three of the four rescued survivors were skittish and difficult to catch, but one little guy came right to Magruder, eager for love, he told KYTV.

“He saw us, and that I had a bag of treats, and he took a treat and he was in the truck [immediately]. He said, ‘I’ve had enough of this’,”Magruder said. “Who could hurt him? Why would you hurt him?”

This amazing Sri Lankan charity is transforming animal welfare, one street dog at a time! Look at the before and after pictures of these street dogs, thanks to Dogstar Foundation.

A Sri Lankan street dog that was riddled with scabies and mange and was blind in one eye, Chester had a calcium deficiency and was malnourished when she arrived at the Dogstar Foundation clinic. 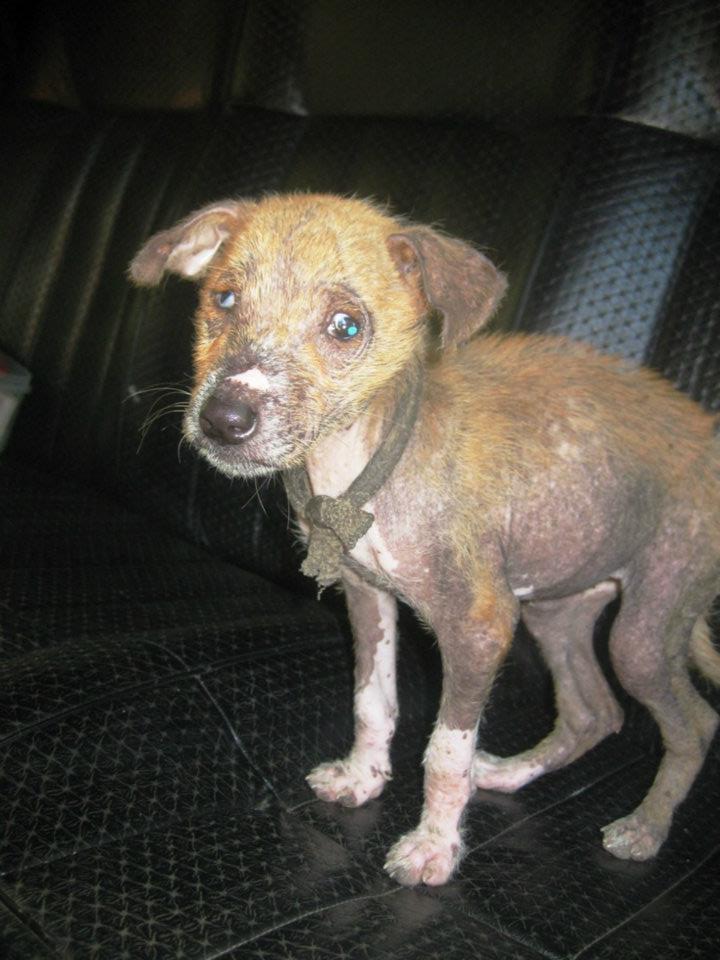 read more of this amazing  story The Dodo