Like Loading...
March 20, 2016
Baghdad Burning  … I’ll meet you ’round the bend my friend, where hearts can heal and souls can mend…

she was a Iraqi blogger I much admire but who disappeared in 2007’ish today I found a new article that  describes  Iraq from her perspective,an ordinary woman trying to live her life but
making good observations that ought to make everyone think hard.WHY are we doing this?

Baghdad Burning… I’ll meet you ’round the bend my friend, where hearts can heal and souls can mend…

April 9, 2013 marks ten years since the fall of Baghdad. Ten years since the invasion. Since the lives of millions of Iraqis changed forever. It’s difficult to believe. It feels like only yesterday I was sharing day to day activities with the world. I feel obliged today to put my thoughts down on the blog once again, probably for the last time.

Looking back at the last ten years, what have our occupiers and their Iraqi governments given us in ten years? What have our puppets achieved in this last decade? What have we learned?
We learned a lot.
We learned that while life is not fair, death is even less fair- it takes the good people. Even in death you can be unlucky. Lucky ones die a ‘normal’ death… A familiar death of cancer, or a heart-attack, or stroke. Unlucky ones have to be collected in bits and pieces. Their families trying to bury what can be salvaged and scraped off of streets that have seen so much blood, it is a wonder they are not red.

We learned that you can be floating on a sea of oil, but your people can be destitute. Your city can be an open sewer; your women and children can be eating out of trash dumps and begging for money in foreign lands.

We learned that it’s not that difficult to make billions disappear.

We are learning that those amenities we took for granted before 2003, you know- the luxuries – electricity, clean water from faucets, walkable streets, safe schools – those are for deserving populations. Those are for people who don’t allow occupiers into their country.

We’re learning that the biggest fans of the occupation (you know who you are, you traitors) eventually leave abroad. And where do they go? The USA, most likely, with the UK a close second. If I were an American, I’d be outraged. After spending so much money and so many lives, I’d expect the minor Chalabis and Malikis and Hashimis of Iraq to, well, stay in Iraq. Invest in their country. I’d stand in passport control and ask them, “Weren’t you happy when we invaded your country? Weren’t you happy we liberated you? Go back. Go back to the country you’re so happy with because now, you’re free!”

We’re learning that militias aren’t particular about who they kill. The easiest thing in the world would be to say that Shia militias kill Sunnis and Sunni militias kill Shia, but that’s not the way it works. That’s too simple.

Those who didn’t know it in 2003 are learning (much too late) that an occupation is not the portal to freedom and democracy. The occupiers do not have your best interests at heart.

We are learning that ignorance is the death of civilized societies and that everyone thinks their particular form of fanaticism is acceptable.

We are learning how easy it is to manipulate populations with their own prejudices and that politics and religion never mix, even if a super-power says they should mix.

But it wasn’t all a bad education…

We learned that you sometimes receive kindness  when you least expect it. We learned that people often step outside of the stereotypes we build for them and surprise us. We learned and continue to learn that there is strength in numbers and that Iraqis are not easy to oppress. It is a matter of time…

And then there are things we’d like to learn…

Ahmed Chalabi, Iyad Allawi, Ibrahim Jaafari, Tarek Al Hashemi and the rest of the vultures, where are they now? Have they crawled back under their rocks in countries like the USA, the UK, etc.? Where will Maliki be in a year or two? Will he return to Iran or take the millions he made off of killing Iraqis and then seek asylum in some European country? Far away from the angry Iraqi masses…

Finally, after all is said and done, we shouldn’t forget what this was about – making America safer… And are you safer Americans? If you are, why is it that we hear more and more about attacks on your embassies and diplomats? Why is it that you are constantly warned to not go to this country or that one? Is it better now, ten years down the line? Do you feel safer, with hundreds of thousands of Iraqis out of the way (granted half of them were women and children, but children grow up, right?)?

And what happened to Riverbend and my family? I eventually moved from Syria. I moved before the heavy fighting, before it got ugly. That’s how fortunate I was. I moved to another country nearby, stayed almost a year, and then made another move to a third Arab country with the hope that, this time, it’ll stick until… Until when? Even the pessimists aren’t sure anymore. When will things improve? When will be able to live normally? How long will it take?

For those of you who are disappointed reality has reared its ugly head again, go to Fox News, I’m sure they have a reportage that will soothe your conscience.

For those of you who have been asking about me and wondering how I have been doing, I thank you. “Lo khuliyet, qulibet…” Which means “If the world were empty of good people, it would end.” I only need to check my emails to know it won’t be ending any time soon.

Chaharshanbe Suri is an ancient ceremony dating back to at least 1700 BCE. Iran’s largest dictionary, Dehkhoda, describes it as: “A festival arranged on the last Tuesday evening of the old year, where you light fires and jump over them, to achieve happiness and good health in the New Year.”

The celebration usually starts in the evening and people leap over the flames, singing “zardi-ye man az toh, sorkhi-ye toh az man”, literal translated as “my yellow is yours, your red is mine”, asking the fire to take their pallor, sickness, and problems and in turn give them redness, warmth, and energy.

Traditionally, it is believed that the living were visited by the spirits of their ancestors on the last day of the year. Many people specially children, wrap themselves in shrouds symbolically reenacting the visits. By the light of the bonfire, they run through the streets banging on pots and pans with spoons (“Gashog-Zani”) to beat out the last unlucky Wednesday of the year, while they knock on doors to ask for treats. Sometimes the treat is a mixture of seven dried nuts and fruits (pistachios, roasted chic peas, almond, hazelnuts, figs, apricots, and raisins) and is called “Ajeel-e Chahar Shanbeh Suri”. The practices are very similar to Halloween, which is a Celtic version of similar festivals celebrated throughout the area in ancient times. 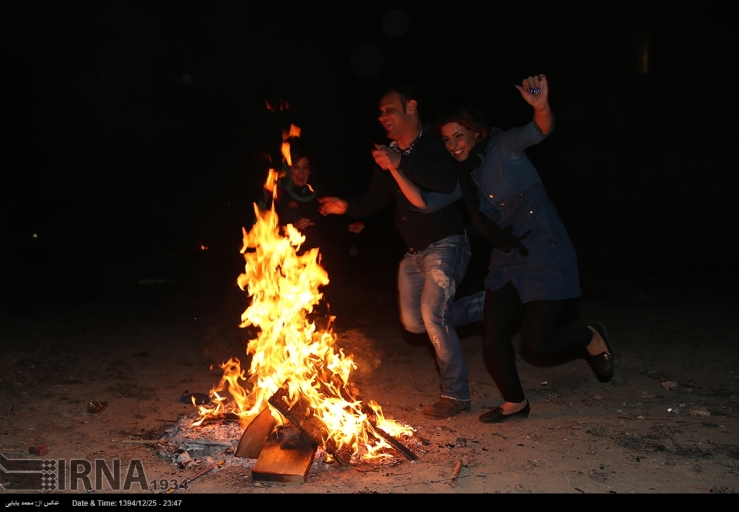 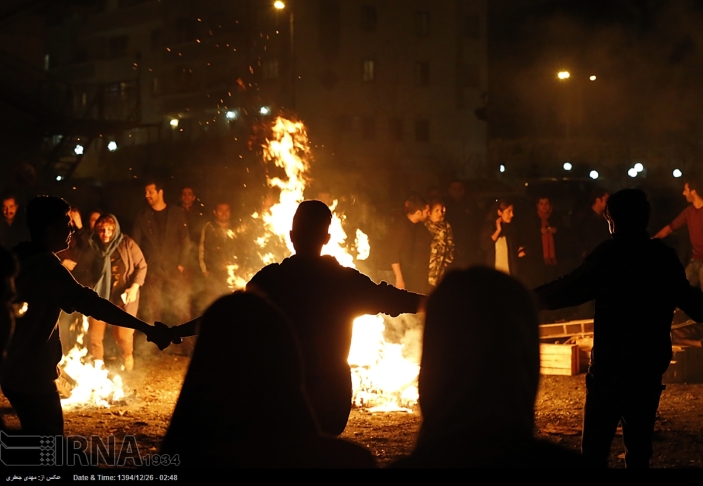 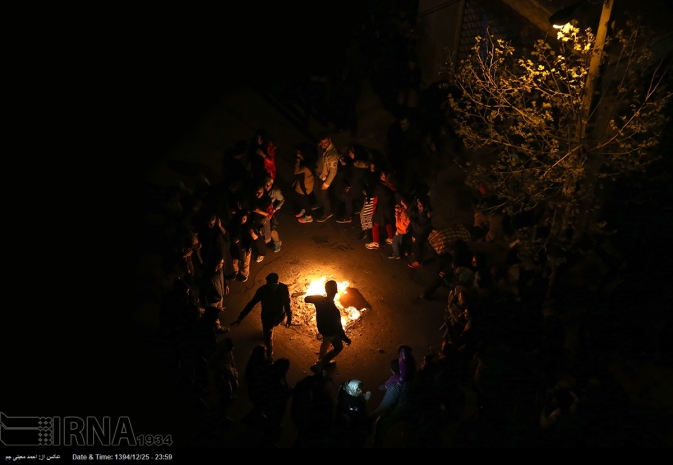 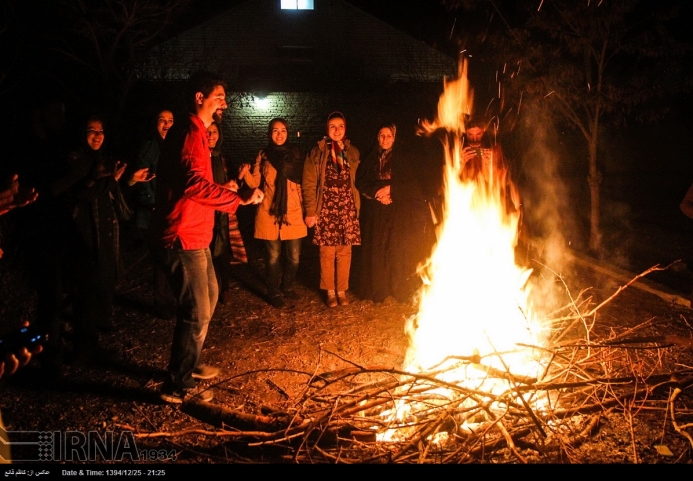 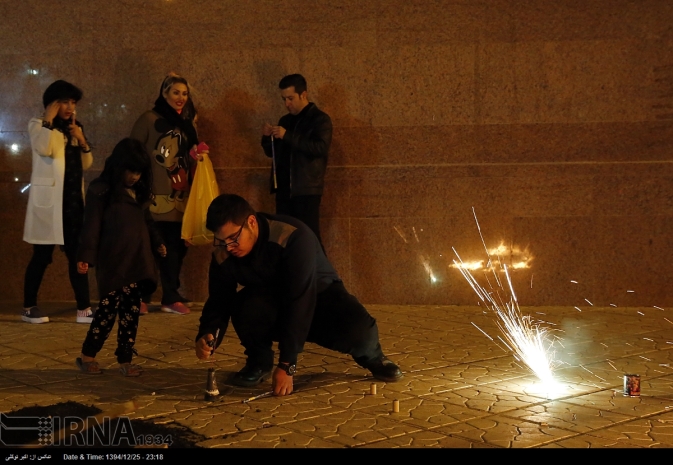 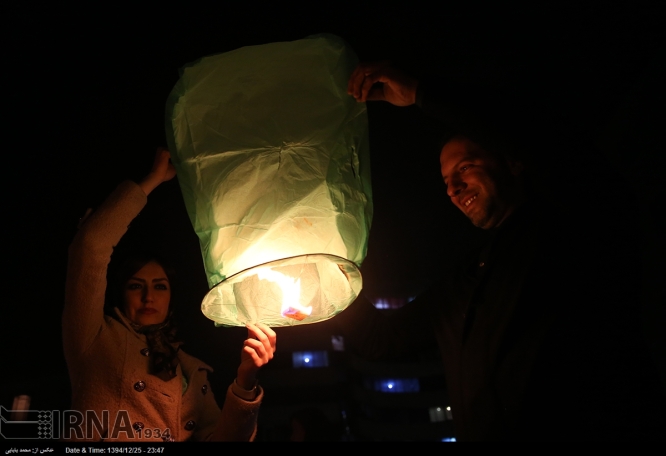 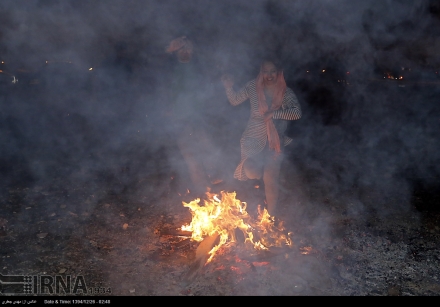 Families customarily enjoy snacks during the evening and a supper at night after the end of the festivities. In Ker­man and Shiraz the main dish is usually polow with pasta soup (“ash reshte“); the longer the pasta strands, the better the chances for a long life for each member of the family.

The ancient Iranians celebrated the last 10 days of the year in their annual feast of all souls, Hamaspathmaedaya (Farvardigan). They believed Foruhars (faravahar), the guardian angels for humans and also the spirits of dead would come back for reunion. These spirits were entertained as honored guests in their old homes, and were bidden a formal ritual farewell at the dawn of the New Year. The ten-day festival also coincided with festivals celebrating the creation of fire and humans. Flames were burnt all night to ensure the returning spirits were protected from the forces of Ahriman. This was called Suri festival. Zoroastrians today still follow this tradition.

The celebration was not held on this night before Islam and might be a combination of different rituals to make them last. Wednesday is likely to have been prompted by an Arab superstition where it represents a bad omen day with unpleasant consequences. This is contrary to Zoroastrian cosmology where all days were sacred and named after a major deity. By celebrating in this manner Iranians were able to preserve the ancient tradition. The festival is celebrated on Tuesday night to make sure all bad spirits are chased away and Wednesday will pass uneventfully.

Today, there is no religious significance attached to it any more and is a purely secular festival for all Iranians (Persians, Azerbaijani people, Armenians, Kurdish people, Assyrians, Bahá’í, Jews, Christian and Zoroastrians). The night will end with more fire works and feasts where family and friends meet and enjoy music and dance.

Fire Festival in Sweden
In Gothenburg, Stockholm and Malmö, Sweden they celebrate Eldfesten, a Swedish version of the Persian Chaharshanbe Soori. This year, 2016, is the 25th anniversary of the festival in the city of Gothenburg, where it has become one of the most popular public cultural celebrations in the city. Thousands of people, including non-Iranians, attend each year to celebrate the arrival of spring with crackling fires, music, fireworks and fragrant Persian dishes. 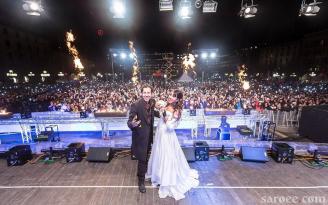 full story at :The other Iran