Welcome to the home of NACCOM, the UK’s national No Accommodation Network.

NACCOM is a national charity (Charity No: 1162434) supporting a network of agencies that provide accommodation for migrants who have no recourse to public funds. Most of these are asylum seekers whose asylum claims have been rejected, but for a variety of reasons have not been deported. They are not entitled to benefits or housing, and forbidden to work.

The purpose of this site is to offer a forum where all who are working to end destitution in the UK amongst asylum seekers and other migrants through accommodation and practical support can share ideas and best practice.

We want to extend the network so that there is a project in every city and town where there are destitute asylum seekers and migrants. We also want to ensure that no-one has to spend a night on the streets, and that there is hope for the future.

Please use the facilities this site offers to get the answers you need, and share the resources you have with others. Alone we cannot hope to solve the problem. Together we can make a massive difference to the lives of the most vulnerable people in the UK.

You can also find us on Twitter @NACCOMnetwork or get in touch on email.

David Cameron was one of at least 73 landlord MPs who voted against proposals requiring rented houses to be “fit for human habitation”, as revealed by the Political Scrapbook.

Labour’s amendment to the housing bill was voted down by 312 votes to 219 on 12 January. This means at least 23% of MPs who voted against have a financial interest in doing so.

The Tories defended their decision by claiming the amendment would push up rents, preferring instead to sacrifice the actual function of a house. This is not the habitat of an animal, but if it were, the animal would surely need its habitat to be fit for it. The same goes for us humans, a house should be – by definition – fit for human habitation.

The shadow housing minister, Teresa Pearce, had this to say

Where else in modern day life could someone get away with this? It’s a consumer issue. If I purchased a mobile phone or a computer that didn’t work, didn’t do what it said it would or was unsafe I would take it back and get a refund

Upon reading the new Housing and Planning Bill, you would be forgiven for thinking it was written by landlords. In fact, you’d probably be right. One-fifth of MPs are private landlords, compared to only 3 in 100 across the electorate.

70% of the 126 landlord MPs are in the Conservative party. Accordingly, the new bill seeks to siphon off vast public funds and land to rich private developers, through branding the houses they will build as ‘affordable’, despite 98% of the country being unable to afford them on Osborne’s so-called ‘living wage’.

Let alone ensuring houses are affordable, the Tories won’t even guarantee they will be fit for humans. 89% of the 73 landlord MPs who voted against the amendment were Conservative, the rest were Liberal Democrats.

MPs enjoyed a real term 9% pay increase from 2014-2015, while other public sector salaries continue to decrease. These types of statistics are bullet-holes in the “we’re all in this together” Tory mantra. Yet, this substantial pay increase still isn’t enough for many MPs – as the number of landlords in parliament prove.

Governing the country should take one’s wholehearted attention. In fact, when asked at PMQs whether the houses would be affordable for people earning the so-called ‘living wage’, Cameron said

I very much hope they will.

Perhaps the Conservatives would know the nuances, and consequences, of their own housing bill if they didn’t have such private interest elsewhere. Cameron’s concerned letter to his local council, where he complains he is “disappointed” by front-line cuts, shows he doesn’t even know how far his own austerity programme goes. They are, perhaps purposefully, neglecting their public duties.

Turkey has arrested 12 academics for signing a declaration denouncing Ankara’s military operations against Kurdish militants. The move comes after more than 1,200 scholars were being investigated for criticizing the Turkish State.

The Anadolu Agency, as cited by AP, says the 12 who were detained by police are lecturers at Kocaeli University in the northwest. Police are still processing the paperwork for nine other academics, who will also be arrested.

The 1,200 academics had been accused of allegedly participating in “terrorist propaganda” after they signed a declaration condemning military operations against Kurdish rebels in the southeast.

News of the investigation was reported by Turkey’s state-run Anadolu Agency.

Around 1,200 academics from 89 universities, including prominent foreign scholars such as Noam Chomsky, David Harvey and Immanuel Wallerstein, signed the declaration, which was titled: “We won’t be a part of this crime.”

It called on the authorities in Ankara to end the “massacre and slaughter” in southeast Turkey and lift the siege of Kurdish towns and cities. The declaration also accused Erdogan of waging a war against his own people.

“The responsibility for the present self-inflicted crisis in the country must lie squarely with Erdogan, who perceives the Kurds… as obstacles to his plan to establish supreme rule for the Turkish presidency,” the declaration said.

Typically, in Nigeria’s predominantly Muslim north, discussing personal and marital issues, like sex and domestic violence, is seen as going against the grain. The conservative nature of Islam and an unspoken requirement for women to be fully submissive to their husbands often means that whatever personal issues are had are suppressed. But an Instagram page is changing that.

Ziya’atulhaqq Usman Tahir, 27, who lives in the northern state of Bauchi, has unwittingly provided women in the region with her Instagram page, @fatibolady, as a platform to discuss sensitive personal issues.

The company is now worth $250 million.

Source: Foursquare Loses Its CEO and More Than Half Its Value

Source: The Silenced Struggle Against Neoliberalism 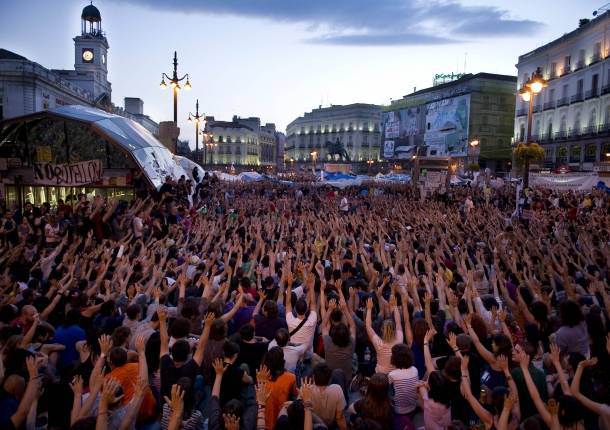 THE INDIGNADOS AT A DEMONSTRATION IN MADRID, 2012

You wouldn’t think it from reading the mainstream media, but across the world activists, authors, academics and ordinary people are battling collectively against the inequality-causing, productivity-enforcing political agenda that is neoliberalism. Occupy Wall Street did not “fade away”, it thrived. Meanwhile, their inspiration , the Indignados, continue to fight against neoliberalism in Spain. Others struggle alongside them: the think tank, Project for the Advancement of our Common Humanity; the Rules organisation that tackles global inequalities, Mexico’s Zapatistas, and the Ekta Parishads of India.

The movement against neoliberalism spreads via publications consumed by millions of people worldwide. Causing quite a stir was Thomas Piketty’s ‘Capital in the 20th century’. You’ve probably heard of Naomi Klein’s ‘No Logo’. Adding to this list of reputed anti-neoliberal literature, there is: Samir Amin’s ‘The Liberal Virus’, Christopher Boehm’s ‘Moral Origins: The evolution of virtue, altruism and shame’, Stanley Cohen’s ‘States of Denial’, Eric Beinhoffer’s ‘The Origin of Wealth’, the compilation of essays in ‘The Wealth of the Commons: A World beyond Market and State’, David Graeber’s ‘Debt; the first 5000 years’, and Charles Eisenstein’s ‘Sacred Economics’.

Organisations researching into the misdeeds of neoliberalism include ‘The New Economics Foundation’, ‘Positive Money’, ‘Strike Debt’ and ‘The Institute for New Economic Thinking’. They inform the public and seek alternative ways to organise society.

All this continuously misses the ears of the mainstream media.