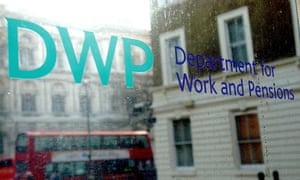 ‘When it comes to pulling the plug on benefits there is no sign of discrimination – everybody is treated equally harshly by the Department for Work and Pensions.’ Photograph: Kirsty Wigglesworth/PA

he Department for Work and Pensions prides itself on embracing diversity and promoting equality of opportunity. And indeed, when it comes to pulling the plug on benefits there is no sign of discrimination – everybody is treated equally harshly.

It is not only those who are too sick to work but are informed they are well enough to do so; nor just those who have failed to adhere to some tiny sliver of bureaucracy. This also applies to people who don’t even realise they have sinned but are left suddenly and brutally penniless.

full story at The Guardian

Work has begun to shore up a river bank to prevent an historic building from toppling into a river.

Abergeldie Castle was left teetering on the edge of the River Dee after heavy rainfall led to a swollen river eroding the bank.

The owner of the 16th century tower house, near the Queen’s residence at Balmoral, was forced to evacuate the property on Sunday.BBC NEWS

Ernst Jünger’s short novelVisit to Godenholm, first published in Germany in 1952 as Besuch auf Godenholm[i], is now available in English language translation for the first time, thanks to the efforts of its translator Annabel Moynihan and Edda publishing.[ii]

It is published hardbound with dust jacket, limited to 400 copies in total: 360 standard copies and a special limited edition consisting of 40 copies. The special limited edition comes in a boxed set with a hand-made linoleum print by the book’s illustrator Fredrik Söderberg, signed and numbered. Publication as a limited fine edition indicates the esteem in which the author Ernst Jünger is held by the publisher and translator. Other than in the relevant volume of the collected works of Jünger’s considerable literary out, Besuch auf Godenholm has not been republished in Germany since its appearance in 1952, a testament to its obscure and esoteric nature.

An architectural tradition dating to the 9th century, Iceland’s turf houses are an enduring inspiration.

Take it from animals that hibernate in dens surrounded by earth and roots, turf makes for a cozy home in cold climes – a fact not lost on Northern Europeans dating back to at least the Iron Age. Building from turf has been embraced in many places, over many spans of time – Norway, Scotland, Ireland, the Faroe Islands, Greenland, the Netherlands and even in the American Great Plains. But while in these areas the practice was used to build dwellings for those with few means, the turf houses in Iceland differ. Iceland’s turf farmsteads developed from the long house – a tradition brought to Iceland from Nordic settlers in the 9th century, the first of which were Vikings. And according to the UNESCO World Heritage List, for which Iceland’s turf house tradition is nominated, the turf-building technique in the island nation is unique in that it was used for all economic classes and for all types of buildings. (And for elves too, right? It’s Iceland after all.)

full story and 11 more pictures at the TreeHugger

Migrant workers will need to earn at least £35,000 to qualify for settlement in the UK, says the Home Office.

Home Secretary Theresa May said the change – from April 2016 – would help cut the number of non-Europeans and their dependants granted settlement each year from 60,000 to 20,000.

The pay threshold will apply to people wanting to remain permanently after more than five years working in the UK.

Those who don’t qualify will be ordered to leave the UK after six years.

The pay threshold is the first time that a British government has imposed an economic test on the right to settlement in the UK. For decades, settlement has been granted on the basis of length of time living in – and ties to – the UK, recognising that people who have been living in the country for five years have made it their permanent home.

Prime Minister David Cameron says he wants to reduce annual net migration to “tens of thousands” from the current level of around 250,000.

It is aiming to bring the figure, which includes students and the families of visa holders, to below 100,000 by 2015 – a year before the latest restriction is due to come into force.